Repairing forklifts by day, you would think that Windsor service engineers would spend their free time with their feet up – but not Brian. As the proud owner of a 1951 Bedford O Type 5 tonne lorry, Brian spends more time repairing than the average vehicle mechanic.

“The truck is 66 years old, so naturally it breaks down a lot and I do all the repairs myself,” said Brian. “I spend more time under the hood than I do driving it!” 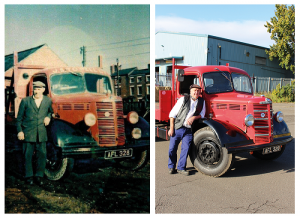 Having bought the truck almost two years ago, Brian managed to get in contact with the family that originally owned the truck, who shared with him a photo taken of the truck with its first driver, Albert Jackson.

“For me, it’s not just about driving and maintaining it, it’s about the history behind it,” explains Brian. “Its first owner was a Boston timber supplier called J. S. Towell, who had the truck from 1951 to 1967, when it was sold to Geo Barnstone in Donington, Lincolnshire.”

In 1990, the truck was sold onto Drummond Mill in Bradford where it stayed unused for two years before being sold to Ken Longthorn in North Yorkshire. Longthorn took the vehicle to rallies on the back of a larger truck and was subsequently never driven. 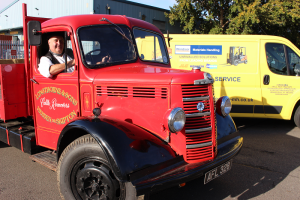 30mph, and today it reaches 40mph. It didn’t have brake lights or indicators when I bought it, so after realising very few people understand hand signals, I fitted them for road safety!”

Taking the truck to most rallies in Yorkshire, Brian owns up to being an occasional cause of traffic delays on the county’s A roads. “The furthest we’ve taken it is Peterborough. We broke down six times and it took five and a half hours, so we stick to Yorkshire mostly. But we are booked in for the Great Dorset Steam Fair next year – so I better roll my sleeves up!” 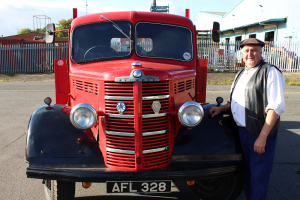 This year, Brian took the truck on the Trans Pennine Run – the north equivalent of the London to Brighton Commercial Vehicle Run, taking place from Manchester to Harrogate. It went on to win second place in the working vehicle category at Harewood House Steam Rally.

“The last outing for 2017 is Whitwood Truck Stop in Wakefield, then I’m taking it off the road to do restoration on the back axle and inside cab this winter,” Brian said. “The truck tows a caravan to most steam rallies, so it needs to be in the best condition possible before we get it on the road again next year!”

Brian’s dedication to his truck is a great example of why businesses continue to choose Windsor service contracts.

“I’ve been a mechanic all my life, but I still find that my hobby helps me in my job and vice versa,” he says. “It’s about being committed to the job at hand, and seeing it all the way through to the end.”

At Windsor, we pride ourselves on having the most highly skilled and well experienced staff in both technical support and sales. Our engineers are manufacturer trained and have developed a deep understanding of all manner of lifting and materials handling equipment. …and in Brian’s case – historic commercial vehicles too.