There’s something odd about the latest iPhone ad. It shows cute kids and quirky Asians taking pictures, ending with the line “Everyday more photos are taken with the iPhone”.

Nothing greatly odd about that you might say, but the copywriter in me was waiting for a ‘than…’

Mainly because ‘everyday more photos are taken with every type of smartphone’, and without the ‘than…’ it makes you think well, the next ad feasibly might say, ‘Everyday more calls are made on phones.’

Sure enough, the US version of the ad has a “than”, and a surprising one at that.

“Everyday more photos are taken with the iPhone than any other camera.” 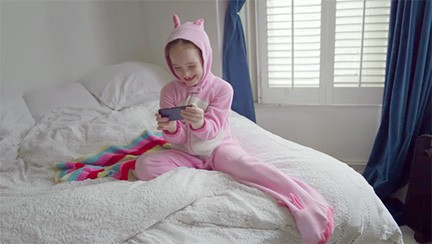 Apart from raising the interesting question about why the UK ad has been watered down (perhaps the ASA doesn’t accept Flickr data as definitive) the word to note is the description of the phone as ‘camera’.

The music version of the US ad has ‘more tracks listened to than on any other phone’ (not mp3 player, iPod, portable music player, whatever) so the idea of the handheld device as camera and not phone was clearly very deliberate.

The ‘camera’ ad itself seems fairly straightforward, being more about the benefits of taking pictures, than the features of the phone. That doesn’t seem terribly radical, although it clearly has its fans.

Together with music, television, shopping, written communication, the news and, of course, telephony, photography has experienced a siesmic change in just a few short years. We really do take a lot of photos on those phones / make a lot of calls on those cameras, and its changing the nature of how we see the picture itself.

Witness the chatter about the latest Prince photos. One of these was the purple-loving musician that shared a picture of a salad via Twitter. That was just weird.

The other, the (possibly drooling) heir to the British throne posing with happy priviledged parents and (almost certainly drooling) dog. The baby shots were critiqued for dodgy composition, poor lighting, ‘trying and failing to look normal’ (!) and, heaven forbid, being taken on a phone!

Parents still go to quite some lengths to get ‘proper’ baby photos (I know this because this week I was one of them) despite the fact that we have at our disposal the means of taking pretty awesome shots ourselves.

What does it matter anyway?

Looking at old pre-digital baby shots you can kind of understand why this used to be a big deal, but it’s still surprising that it remains popular, even if the Daily Mail describes them as ‘classy but dull’. My photographer friend Christopher would undoubtedly point to the fabulous lighting, the perfect focus and framing (despite a very challenging subject!) and the sweaty mess he left the shoot in, all as proof as to why the pro shots were worth the effort.

And he’s right. Yet we still can’t help but feel that ‘what’s in the picture’ sometimes transcends its means of arrival. Just check these amazing shots if you’re in any doubt…

In the meantime, we’ll keep snapping away in good light and dark, maybe considering ourselves ‘pro-sumers’, as what does it matter anyway? The ability to delete makes these snaps more disposable than ever. (Takers of hideous selfies, please take note).

Perhaps for most of us therein lies the difference. When we want to record something for prosperity, it should be professionally composed, lit and shot. When we want to capture a moment or something to look at, coo and share electronically, Apple will do. Perhaps with an instagram filter if we’re after something really classy.

In that spirit, we have at least a zillion pics of our little one taken with the iPad mini, perhaps giving ammo to Apple’s ad claim (sort of).

Although the latest great shot of the wunderkind was neither amateur nor, I’m guessing, professionally taken. How so?

The lady who shot our meet and greet at ‘In The Night Garden Live’ may know how to press the button, but I’d be amazed if she knew a pushed f-stop from an Iggle Piggle.